Overall Thailand’s economy in the first-half 2019

Source: Adapted from Gross Domestic Product (GDP) data by the Office of the National Economics and Social Development Council https://www.nesdb.go.th/ewt_dl_link.php?nid=8882

The overall economy of Thailand in the first-half 2019 indicates a slow economic growth since Thailand has been continuously facing various internal and external fluctuations. The Office of the National Economics and Social Development Council (NESDC) revealed estimated growth rate of Thailand’s economy by taking into account the Gross Domestic Product (GDP). It is found that the GDP growth rate in the first quarter of 2019 was at 2.8%, which is lower than the estimated GDP growth rate for the whole fiscal year 2019 at 3.3-3.8%. It is also lower than the GDP growth rate of the fourth quarter of 2018, which was 3.6%. This shows a continuous slowdown of Thailand’s economy from the end of 2018 onwards.

Analysis of Thailand’s economy in the first-half 2019

Private consumption growth rate is as high as 4.6%, compared with 5.4% of the previous quarter. This is due to an increase in employment rate and income base caused by governmental short-term economic stimulation measures assisting low-income people. Other significant causes include a low inflation rate and an increase in consumer confidence. As can be seen, the Consumer Confidence Index rose from 67.4 in the fourth quarter of 2018 to 68.1. 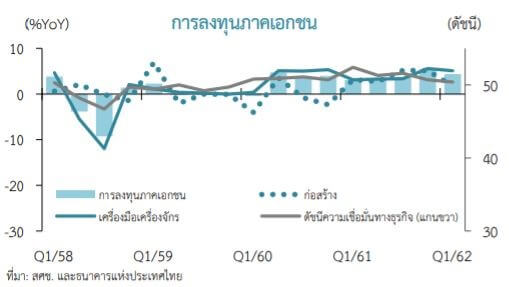 Private investment growth rate is as high as 4.4%, compared with 5.5% of the previous quarter. This is caused by an increase in import volume of machinery, equipment, and cars, although the distribution of construction materials is decreasing.

Application for Investment Promotion from the BOI

As can be seen from the volume of BOI Investment Promotion, private investment during January until March 2019 is still in good place. The volume of granted application is 134.6 Billion Thai Baht, increasing to 76.7%, compared with 36.5% of the previous quarter. The total value of Investment Promotion Certificates issued is 89.1 Billion Thai Baht, gradually increasing to 3.8%. The Business Sentiment Index slightly drops from 50.7 in the fourth quarter of 2018 to 50.4.

*Note: 1. Projects with shares held by foreign investors freely floated in stock exchange are not included.
2. The BOI has revised their 2017-to-present database by taking all projects applied for performance improvement into account.

The Foreign Direct Investment (FDI) indicates that 245 projects, valued 84 Billion Thai Baht (253% higher), have applied for BOI investment promotion from January to March 2019. This amount is regarded as 65% of all investments that applied for this promotion (12.89 Trillion Thai Baht). Among all these, applications from 250 projects, with a total investment value of 75 Billion Thai Baht, have been granted approval from the BOI. The sources with highest investment are China, Japan, and Hong Kong respectively. Major targets include digital industry, medical hub industry, petrochemical industry and chemical supplies, and machinery automation and robotics.
In the first quarter of 2019, foreign direct investment (FDI) ratio in Thailand is more than half of the total value of application for investment promotion from the BOI. FDI therefore is significant to the growth of Thailand’s economy. Besides being inflows that compensate lower proceeds from export, FDI also leads to higher employment rate, technological transfers, and development of important basic infrastructures in Thailand.

4)         Government Spending and Government Investment (+,-)
Government spending grows gradually at 3.3%, compared with 1.4% in the previous quarter, from product and service procurement, as well as wage and payroll settlement. Meanwhile, the government investment is slightly lower at 0.1%. This is mainly caused by lower public enterprise investment.

5)         Export (-)
Export volume in US Dollars is drastically decreasing to 3.6%. This is the first cut-down in 11 quarters so far. This volume grew at 2.2% in the previous quarter. The major reason of lower export volume of goods is economic slowdown in our trade partner countries.
In terms of economic stability, Thailand is still in good place with low inflation rate (0.7% in the first quarter of 2019), low unemployment rate, and a balance of payment surplus.
Second Quarter of 2019
Revealed data on Thailand’s economy in the second quarter of 2019 from the Bank of Thailand (BOT) indicates that Thailand’s economic growth rate slows down due to lower demands from other countries, lower export volume, and less number of tourists, especially from China. In the meantime, domestic demand is decreasing as well. Private consumption and government investment are still able to grow, while private investment and government spending are decreasing. In terms of economic stability, inflation rate has been adjusted according to prices of agricultural goods affected by hot weather. Unemployment rate is low and stable since the previous quarter. And there is a surplus in the country’s balance of payments.

Although Thailand’s economy is still stable, the NESDC’s 2019 forecast on economic growth rate suggests that the GDP growth is continuously adjusted lower in accordance with other significant economic indicators. These include a drastic decrease in export volume, global economic and political fluctuations, the US-China trade war, and the surging Thai Baht. It is also expected that private consumption and government spending will grow the same as those of the previous year, and that private investment and government investment will grow gradually.
Recently, various sectors have continually adjusted the forecast of GDP growth rate lower. In July 2019, the World Bank adjusted Thailand’s GDP growth rate down from 3.8% to 3.5%. Therefore, this is another challenge in the second-half 2019 that Thailand has to boost its economic growth in order to increase its whole-year GDP growth rate as expected.

Trend in the second-half 2019
Although Thailand’s economy in the first-half 2019 slowed down from various factors such as global economic fluctuation and an ongoing trade war between China and the US, it is expected that Thailand’s economy in the second-half 2019 will improve and grow as forecasted. The positive prospects include private investment, especially the Eastern Economic Corridor (EEC) development plan; the development of transportation and logistics systems, and benefits resulted from trade barriers between China and the US that will be favourable for Thailand’s export of some product types. Also, the relocation of manufacturing bases into Thailand will bring about higher capital inflows, productivity, employment, and private consumption in order to boost Thailand’s economic growth.