What is Bond Yield and how does it affect the stock market, gold, and currency?

What is Bond Yield and how does it affect the stock market, gold, and currency?

Bond Yield is the yield of government bonds that is classified as a low-risk interest rate. The yield is more or less dependent on the type of bond; the shorter the bond is, the lower the yield, while long-term bonds have higher yields. The current issue is the stance of the US 10-year Bond Yield, which is likely to go up after the low interest rates during the QE period. Until recently, at the start of 2021, US bond yields failed to hit a significant new low, prompting investors who did not want to take a high level of exposure to the stock market to turn their attention to Bond Yield causing the price to continually rise.
How Bond Yield’s Fluctuation Affects the Stock Market, Gold, and Currency. 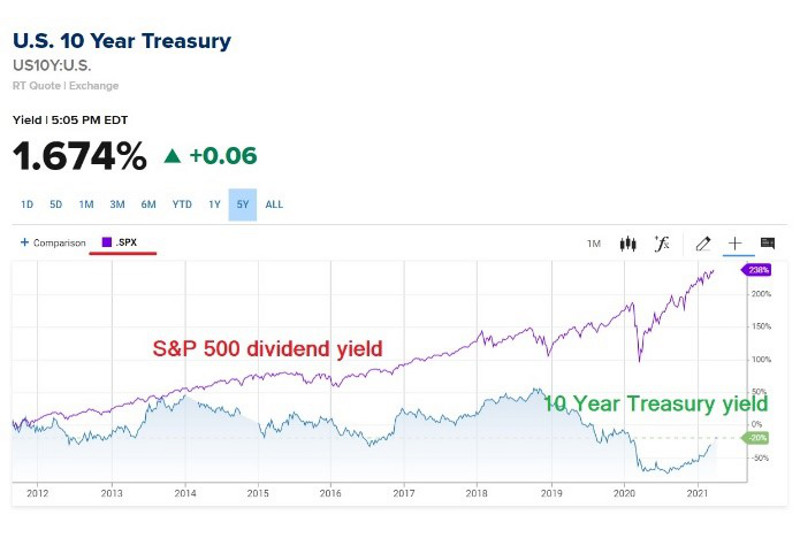 From the figure, it can be seen that the US 10-year Bond Yield from 2012 onwards goes against the return on investment in the S&P 500 stock market, while assets like gold are the same. After hitting a new high of US $2089.20 per ounce on August 7, 2020, and the trend continues to decline, it is unlikely to return to a new high at any time in the near future. What concerns investors in stocks and gold is that the yield on the 10-year US bond has rallied so that prices can turn back at the point of the COVID-19 crisis at the beginning of 2020. This is in line with US economic figures that have improved under the advent of President Joe Biden, who is ready to inject money to stimulate the US economy in a big way. This means that large investment in real sector and employment will occur both domestically and internationally, especially in Southeast Asian countries where labor wages are still much lower than in the United States. This can be seen from the stronger foreign exchange rates for the Thai baht against the US dollar. It is possible that in the middle of 2020 there was a large amount of money to invest in various industries. This can be seen from the Bank of Thailand Industrial Production Index, which is in line with the BOI’s investment promotion request report with the amount of investment in Thailand. That means there are still a lot of foreign companies interested in investing in Thailand, even after the COVID-19 crisis.


Recommendation on how to spot and survive when the crisis hits.
Most people are speaking with the same voice that as early as 2020 to the present, the world is facing an economic crisis due to the virus outbreak. But, if you consider and look at the statistics of the past economic crisis, it will be found that every time it occurs, it is always followed by the collapse of financial institutions such as the Asian Financial Crisis which began in Thailand that resulted in the closure of more than 30 financial institutions, and the subprime crisis in the United States that resulted in the bankruptcy of Lehman Brothers and AIG. While the early 2020, it was seen as a warning sign of a giant bubble waiting to explode because everywhere we turn there are countries with QE cutting interest rates to near zero. What is important is that we are able to notice the early the warning signs when a crisis is forming. How we can do so, and how we can be cautious is of even greater importance.


How will the business survive when the crisis hits?
Many people wonder if there is also a way to survive the crisis. If you look carefully, crisis is the opportunity for those who see the problem, because there are always two sides of the coin. What are some ways to survive? Let’s have a look.


No matter if it is an economic crisis or any other crisis, there is always a signal for everyone to be aware of. Some of the signs may be so faint that it is difficult to feel, like the theory of boiling frogs. First, the frog is placed in a pot with water at room temperature. Then the heat is increased gradually so that the frog is able to adjust to the temperature. Before the frog realizes that the water is too hot, it is already cooked. When investing, too, one should keep an eye on changes in the environment, especially financial information, interest, stocks, gold, and other investments, as these serve as useful signals to investors.